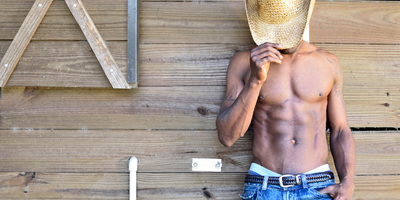 A cowboy walks before me. Is that Jake? He looks like Jake. What kind of car is he driving? The same walk. Why do cowboys wear skin-tight jeans? His cowboy shirt was loose, not tight, and stretched on his toned frame. He used to favor dark colors, now wearing a light blue shirt. His short, blond hair? Should it be gray by now? It seems like the last twenty years have not changed him. What kind of woman would put up with him? Does he beat her up, or does he respect her because she is a woman?

I am not as thin as I used to be, I have gray hair, and my belly sticks out. I have matured and grown old. I did not commit to anyone. How many relationships have I sabotaged when things were getting serious?

I take a deep breath. My heart is beating fast. He has no memories of just a movie, cooking dinner, and cigarettes being fresh. My friends told me that he would beat me. Those six months is a blur. The bruises were real. Never on my face. I fell a lot during those six months. I have not fallen or had a bruise since he left me.

Jake did not work when we were together. I provided everything. He was always in my wallet, taking money for cigarettes and beer.

“There’s something wrong with the two of you,” my roommate would say.

“I don’t know what you’re talking about.” I would answer.

“I can’t put my finger on it. He’s too controlling.”

Jake knew what he wanted and knew how to get it. I am the one who decided what we would do. I think.

Where is he going? Did he park at the end of the garage? I follow behind. He turned, and I crouched behind an SUV. He walks slowly and deliberately as if waiting. I look through the window of the SUV and cannot see his face. There is light over him, and I do see the gray hair. He looks at his watch and nods. I know it is he.

I glance at mine. It is five to five. Oh! How I hate five o’clock. I am always anxious. The dread and fear of him showing up at my work and taking me home. Wake up the following day, not knowing what happened the night before. Bruises on my arms and ribs would appear days later. The excitement and desire of love that my boyfriend was picking me up for a lovely evening filled my heart. We would go to dinner at his favorite restaurant, Mexican. Now I hate Mexican food. Those two feelings intermixed give me anxiety that I constantly changed jobs so he would not find me.

What is he doing? He walks a few more feet, stops, and looks back. He knows I am following. I sit down on the concrete floor and wait. If I breathe too loud, he will hear me. Tears are running down my cheeks like a waterfall in monsoon season. Sweat beading on my forehead. I cannot swallow, and my hands are trembling.

Then, one night after sex, “I’m going back to women,” he said.

I woke up in his arms the following day, cooked him breakfast, and did his laundry. He stayed at the apartment that whole weekend. We slept together the next day, and when he was ready to leave, he asked me for more money.

I drank every night. My door unlocked, waiting for him to return. I saw him whenever I saw a cowboy. I am a coward when a man comes near me. I jump when I see a shadow. I sleep with the lights on and my eyes open.

“You’re no good,” Jake always said. “You’ve gained some weight. Fatty,” he continued. “You’re stupid, and no one wants you.” He did not stop at that. “You worthless piece of shit. You are fat, ugly, and worthless. What did I see in you?”

What am I doing? Follow Jake around as if I would actually talk to him. How many times have I dreamt of seeing him again? What would I do if I did see him again?

I would run to him. Hug him and ask for forgiveness. He would forgive me, and we would be happy. I would move in with him. Cook, clean, and maintain order. He would work and come home to a clean house and a home-cooked meal. How he loved my cooking. How I loved him.

On the other hand, I would grab the first rock on hand. Walk up to him and hit him on the head. Made sure that the head was a heap of broken skull and gray matter mixed with blood on the floor. Kick him hard on the ribs. Scream his name aloud and ask him to beg for forgiveness.

Nightmares were prevalent in my life. I would see him and fear away. He would walk up to me and strike me to the floor. Kick me and call me names. I would hide unsuccessfully from his pointy boots. I would lie on the ground bleeding and pray for the end.

I hear his footsteps. I try to get up and cannot move my legs. They have fallen asleep. I froze as the footsteps came closer and were by my side. I turned to see the snakeskin boots. I look up his legs to his large belt buckle with the figure of a buffalo. I look further up and see his face.

“Are you okay?” he asked, bending over and stretching his hand out to help me to my feet.

I let go of my breath. Did not realize I was holding it. I took his hand and stood up. “Yeah. I am fine. Had a little anxiety attack. Can’t find my car.” I blurted out.