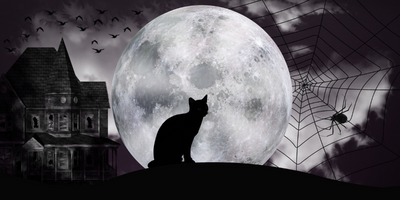 And Then There Were Two

It was a dark, stormy, and spooky night. Not a zombie was stirring, not even the black demonic cat. Unless you look away, you couldn’t see Kitty move in the lack of moonlight, or you had to follow its bloodshot eyes gazing out at you as if you were his next meal.

The youngest member of the Henderson Writers Group, Dominic held a lit pumpkin in his hands. A bump on a stud almost made him trip and lose hold of the gourd. Composing himself, he continued guiding the remaining published authors further away from the cemetery and into the haunted. The storm abated, the clouds cleared, and a light beam spread across the clearing ahead. “Stop.” Dominic held his fist in the air. A cluttering of moans and groans came from the group.

A blood-curdling scream came from the back. They all turned to see who it was. A cane lay on the ground with scratch marks. “He’s gone.” A sexy woman wearing only a tutu and strategically covered with her long, grey hair screamed. Dominic pushed the few members to see who had disappeared. “Stay together. We’re almost there.”

“I want to go back to the hospice,” a man wearing a skeleton suit whined. “It’s past my bedtime.”

John? Is that you? Oh shut. I thought you died last week.” A Vegas show clown touched him, to be sure.

“I’m telling you, Jeffrey is gone. Taken. We were twenty-five when we started. Now we’re…” the sexy woman said.

“Five. We’re five.” Tina said calmly. Her lace dress fluttered, her red hat falling off her head again, “and then there were five.”

“What was in that potion? I want some.” A handsome goblin snatched her bottle from her and tasted the last bitter drops left.” If you don’t tell me, I will blog about it.”

The moonlight disappeared. Dominic made his way to the front. “Come on, we will be late for the President’s opening speech.” The rest followed him into the open field.

Moments later, they were back in the woods. “Halt. Who goes there?” a severed head yelled from the ground.

Dominic tripped over it and fell. The others toppled over him. His pumpkin escaping his grasp landed with a loud thud. Worms and maggots scrambled away from their casing. Two eyeballs stared at him. “We must be close.” He winked at the severed head, who winked back.

The group helped each other up, patting each other's dirt, leaves, and maggots. “Dominic?”

“The treasurer is gone. Her money bag is just lying there. She was right behind me.”

“Come on a few more feet, and we’ll be at the Las Vegas Conference.”

The four took a deep breath, walked two feet, and screamed as the earth swallowed two of them. Dominic and Tina fell on soft down feathers in a dark cavern. A bell chimed. “We’re here.”