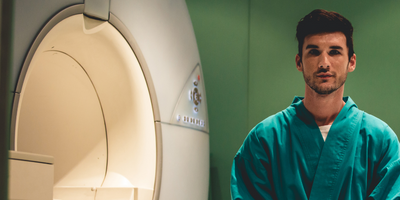 Franklin sits on the table in the examination room.

"I'm Dr. Rontgen." The doctor stood up and fixed his stethoscope on Franklin to hear his heartbeat. "What seems to be the problem?"

"I think I have a heart attack."

"What makes you say that?"

“My chest hurts, my arm goes numb, I can’t breathe, and I can’t move. I almost had a car accident driving here.”

“Wow. What do you do for a living?” Dr. Rontgen stopped short because he could not hear anything through the stethoscope.

"A food blogger. I critique restaurants five or six times a week. I am paid for each meal. I started seven years ago, and it was only once a month. Now everyone wants my taste buds." His heartburn flared up, and he burped. "I'm sorry."

"Does that happen often?"

"All the time, it seems. I know it’s not heartburn."

Franklin took a deep breath, held it, and exhaled. "I have no heart."

The doctor tapped the stethoscope a few times on his hand. He placed it on his chest and heard his own heartbeat.

The doctor placed it on Franklin's chest, but still no heartbeat. “Why would you say that?"

"When I was eighteen, I met a man. I gave him my love. He tore my heart out. Since then, food has filled the void in my chest. I'm the most sought-after food critic blogger."

"Franklin. I'm Wilhelm; Here to take you to MRI."

Wilhelm opened the door. "Anything metal on the tray, and take off your shirt and belt." He winked.

Franklin took off his jewelry. The shirt he placed on top of the tray. "Okay."

"Good. Now let us get you comfortable on the table. I am going to insert an IV with barium. You’re going to feel warm."

Wilhelm took his pulse. "Relax; it's not going to hurt."

"Do you know how many people try to get away with free food by wearing red shoes?"

"I met you a year ago at Chichi. You blogged that you were going, and that’s why I went. We talked about Italian food. Do you remember?"

“I knew you looked familiar.” Happy he was talking to a hot cutie, his pulse quickened. "I remember your girlfriend came to pick you up, and you two left."

The bell rung. “Showtime.” Wilhelm rushed to the other office.

Franklin took a deep breath as he slid into the MRI. Fantasies of Wilhelm filled his dreams.

Back in the examining room, Franklin thought of how an amicable big banana split would ease his depression. "Damn it. All the good guys are either straight or not broken." He smiled at that thought. "Housebroken." How inaccurate. His eyes teared up, and he sniffled.

Dr. Rontgen sat on the stool.

"See. It was ripped out just as the Aztec warriors."

"Did your ex make Posole afterward?"

Franklin smiled. "The next morning, I went to my mom’s, and that's what she had made."

"I'm glad you're smiling. You’re getting X-rays. Something’s wrong with the MRI."

There was a knock on the door.

"I'll see you in a couple of hours." Dr. Rontgen said.

Wilhelm led the way to the X-ray room.

"I don't. I'm clocked out, and I knew how nervous you were. I wanted to be here for you. I hope you don't mind."

Franklin felt confused. "You didn't have to. Thank you?"

In the X-ray room, an old woman took over.

"I'll be in the other room. If you need anything, call." Wilhelm said.

After the X-rays, Wilhelm guided him to the examining room. "I have to go now."

"I know. Thank you again. You helped with my nerves."

"I hope I'm not forward. I've been invited to Chichi this weekend… I can bring guests. Would you and your girlfriend join me? It's comped?"

"That was my sister, and she was visiting."

"Yes. I will join you for dinner." Wilhelm took a deep breath. "Maybe we can do something afterward?"

Dr. Rontgen lifted Franklin's shirt and checked for a heartbeat. "Breath in." He checked through the back. "Let go." Then he checked his pulse.

"Your heart is beating now. I think you have anxiety attacks. I recommend you take it easy, eat healthier and exercise."

"I'm serious. I’ll give you a prescription for it." The doctor said.

That weekend Franklin sat in his car having chest pains. Wilhelm had texted him that he was waiting inside. Franklin took a pill and a deep breath. He got out of the car and walked into the restaurant.

Wilhelm was dressed nicely in a black blazer, white shirt, black slacks, and red shoes, making his way to him. "I’m here. I hope I'm not underdressed."

"I wanted everyone to know I was here with you." Wilhelm beamed.

Franklin's eyes teared up. "Shall we eat?"